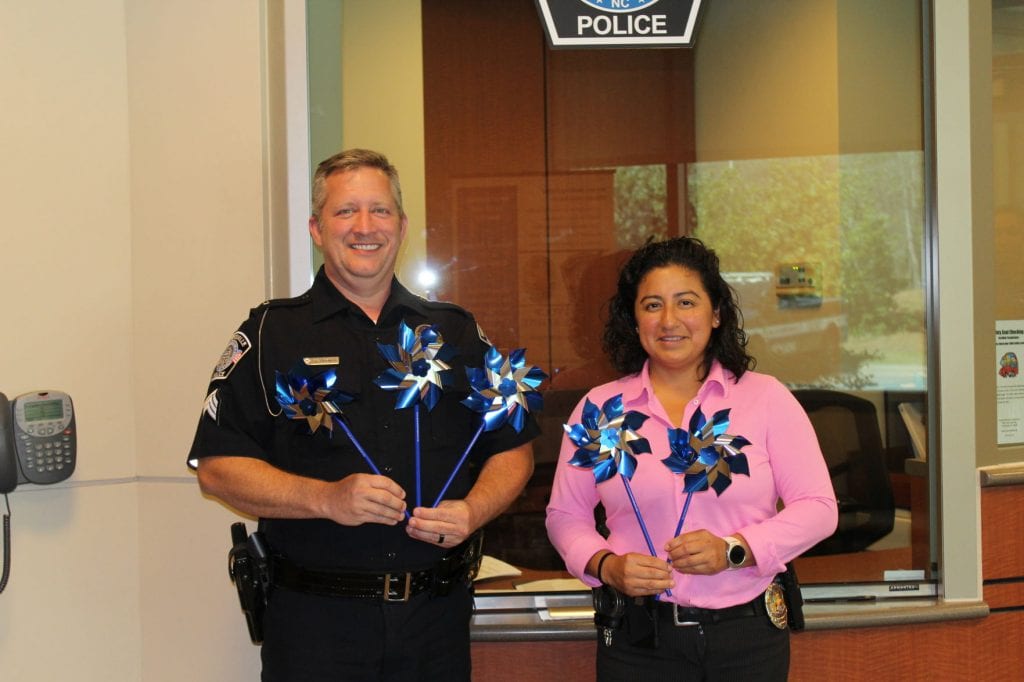 Sgt. Brad Habenicht (left) and Detective Susan Cabarcas of the Huntersville Police Department, holds up some of the pinwheels available at the department for Child Abuse Prevention month.Lacey Hampton

Pinwheel gardens popping up around town and other initiatives are raising awareness about April being Child Abuse Prevention month.

The Mecklenburg Child Abuse Prevention Team, along with other organizations throughout the region, have begun planting the gardens.

“We always want to draw attention to child abuse and try and help children that are in need,” Sgt. Brad Habenicht of the Huntersville Police Department said.

He recently set up a pinwheel garden at the department, and pinwheels are available for free inside, he said.

The Huntersville Police Department is one of many sites in Mecklenburg County having pinwheel gardens and working to raise awareness during the month. Some other places people can find pinwheel gardens are at branches of the YMCA of Greater Charlotte, The Latta Plantation Recreation Center in Huntersville, Jetton Park in Cornelius and at several Charlotte-Mecklenburg schools, Ritsema said in an email.

“I’m thankful that April is a month to promote and emphasize child abuse prevention,” said Anita Craver, who works with community relations for Support, Coaching, Accountability and Nurturing (SCAN), an organization that works to assist children and families in Iredell County.

SCAN is also promoting the pinwheel gardens and has many activities planned this month. On April 3 for instance, the organization hosted a Standing Together Against Child Abuse event in which people wore blue and speakers spoke about child abuse prevention. There is also a 5K run planned on April 18, Craver said.

Instead of pinwheels, the Lincoln County Child Advocacy Center is offering blue light bulbs to people. The lights are available for a minimum $3 donation and can be purchased through the center and in the Denver area at Rich Lyon State Farm, said Sherry Reinhardt, executive director of the center.

“We are selling blue light bulbs to light up the night for child abuse,” Reinhardt said.

Not everyone has a yard or area to put a pinwheel in, and some people have trouble putting pinwheels in the ground, but many have a porch or a window where they can put a light bulb so that is why they are offering them instead, Reinhardt said.

“We’re not going to investigate our way out of child abuse. It starts with prevention,” she said.